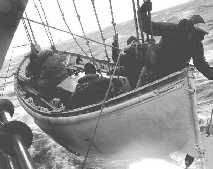 They called them the “Sailing Calicchio Brothers” because Dom, Fred, and Michael all were sea captains. Dom is famous among Coast Guard inspectors because of his courageous investigation into the wreck of the SS Marine Electric. Both Dom and Michael are gone now but Fred is energetic in preserving Dom’s legacy and promoting Coast Guard safety.

The Coast Guard Training Center in Yorktown honored that work the other day and I could not more energetically second the notion.

One of my fondest memories of two of the three brothers in action is when Michael, Fred and I were driving to a banquet posthumously honoring Dom in the Washington, D.C. area. Bob Cusick, former chief mate on the Marine Electric, was also in the car.

All three salts began navigating the car trip via their position near the Potomac — which our road followed — and the navigation lights they recognized there.

That would have worked great. If we were on a boat. We weren’t and quickly became lost. It’s the one tme when my poor land navigation skills came in handy and I got us there in time.